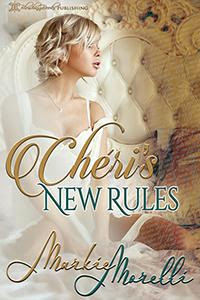 Every marriage has its ups and downs and for twenty years, Judge Michael Reynolds has been reminding himself of that fact. His wife, Chéri, is the epitome of the perfect suburban wife. Chéri works for an advertising agency, raises their twin sons, and micromanages them all to within an inch of their lives. It’s working, he reassures himself. It’s not working well, but it’s working. He keeps his nose to the grindstone and stays out of her way as best he can, avoiding confrontations and acting as a buffer between her and the boys. Even now he isn’t sure if he is having a mid-life crisis or it has something to do with the boys going off to college – but one day he’s had enough, more than enough! It’s time for some new rules, and for the first time in a very long marriage, he feels capable of enforcing them. Michael tries not to present them as an ultimatum, but Chéri knows what they are just the same. Her husband is tired of her domineering, controlling ways. While he readily accepts his part of the blame for what their marriage has become, he is not willing to continue with the status quo.
What he wants shocks her to the core. At the same time, there is a certain aspect of his idea that appeals to her in a way she never would have suspected. You see, Michael wants to take over. He wants to be the one in charge of their household and especially of her, as he’s convinced it will improve their love life as well as their marriage. He wants to try age-play. They will start slowly, he assures her. On the weekends he will become her daddy. She will leave her troubles and adult responsibilities at the door when she walks in the house on Fridayevening. From then on, it is his turn to take care of her. He will provide for all her needs, love and care for her, and discipline her when the need arises. In return for her obedience, she will be pampered and sexually satisfied in ways only he is aware of.
For sure it is a leap of faith, but Chéri takes it, and finds far more than she bargained for as this forty-something couple learns you can teach an old dog new rules.
DISCLAIMER: This book contains the the dynamics of domestic discipline, age-play, elements of power exchange, and sexually explicit scenes including anal play. If any of these offend you, please do not purchase.
Enjoy this free preview of Cheri’s New Rules: